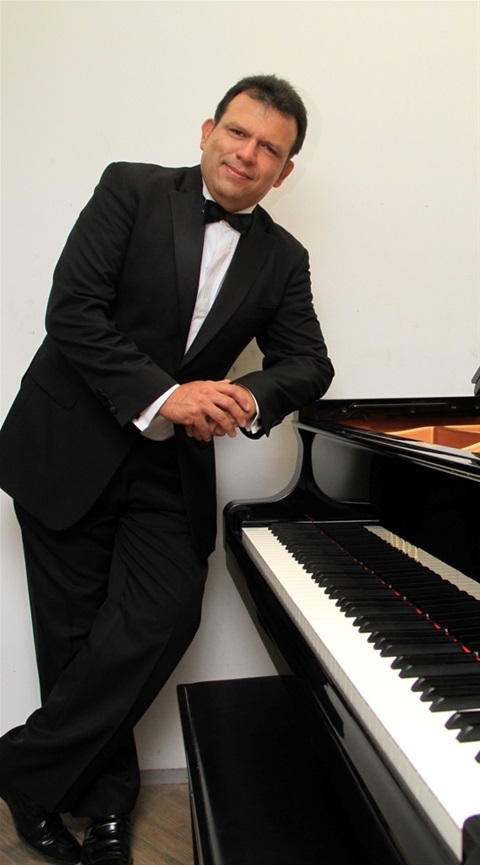 Check here for news regarding to concerts, comments, experiences, site updates and more. I will be updating periodically this section and maintained you informed.

Concerts to be performed at the Niagara Region of Canada in 2017 have been updated inside the 2017 schedule tab.

Video clips of Beethoven "Empeoror" concerto from Nov 19 performance with the Puebla Philharmonic inside the Auttum Season have been added inside the "Soloist" Videos section.

Performance of the Philharmonic "5 de Mayo" from November 19th in Puebla city at the "Reforma" auditorium can be heard on line in www.mixcould.com from pueblafm local internet radio station. Click the "PODCAST" link inside my "Schedule" page item corresponding to the Nov 19 concert.

Audio Tracks from Cervantino and Camerata 22 added on Sept 29th

Audio tracks from Camerata 22 broadcasted on August 2013 and Rachmaninov 2nd Concerto performed at "Cervantino" Festival with "5 de Mayo" Philharmonic Orchestra, conducted by Fernando Lozano, on October 2013 have been added to the "Recordings" Section.

MP3 Chopin and Rachmaninov recordings in chirb.it on Sept 26th

Tracks of live recordings from Chopin and Rachmaninov piano concertos performances included in "Recordings" section have been uploaded into the chirbit.com mp3 file sharing service. Those are referenced by links in my site that lead to the chirb.it mp3 track in a new window. You just have to click the play button to hear the recording once the track comes out after clicking the desired link.

Rachmaninov's 2nd piano sonata performance clips have been uploaded inside "Videos->National Performances I". It was included in my recital at the "Miguel Aleman" Foundation Library on January 2015 in Mexico City. The piano of this place is an old (arround a century aged) Steinway grand in excelent condition and the entire place is inspiring for the beautiful building as well as the antiquities related with mexican history and President Miguel Aleman's life.

An artistic work that definetively has touched my life was the Camerata 22 live video produced on August 2013 by the mexican TV channel 22. I really thank Mtro Fernando Lozano for the invitation and the great artistic and technician team for producing and broadcasting this piano work set, performed at the Narional Arts Center in Mexico city, which includes Chopin Ballade Num 1, Ravel Gaspard de la Nuit, Horowitz "Carmen" Fantasy transcription on the Bizet opera, Liszt Paraphrasis transcription on a Verdi's Rigoletto opera aria and the famous mexican waltz "over the waves" (sobre las olas) by Juventino Rosas transcribed by Jose Rolon. Clips are included in "Videos->National Performances"

An unforgettable experience for me have been uploaded inside "Videos->Soloist Videos" section. It includes 4 clips with the complete 2nd Rachmaninov's piano concerto Op 18 performed on October, 2013 at the "Asuncion" Church in Guanajuato Mexico inside the "Cervantino" International Festival 45th edition. My great honor was to play with the Philharmonic "5 de Mayo" of Puebla, conducted by the wonderful Mtro Fernando Lozano, a solid and historical institution in orchestral conduction in Mexico. Clips were professionally produced by the mexican cultural TV channel 22.

Tracks from my performance with the Puebla Philarmonic Orchestra "5 de Mayo" have been uploaded. This concert took place in the Puebla City "Reforma" auditorium on October 10, 2015. I had the great honor to have Guillermo Salvador as guest conductor. I worked hard during 2 years preparing this big and challenging piano concerto, one of the most difficult in the piano literature. My premier performance was an unforgettable experience and definively it is my big desire to find more opportunities to perform this concerto and get improvement.

Yesterday night I performed with Balbi Cotter, violinist and Jan Zalud, cellist at the "Chapultepec" Forum in Mexico City with a great Petrof concert piano. This is the fourth of six performances being done between August and September for "Bellas Artes" (Beauty Arts) in several important culture centres in Mexico. In all of them, people is informed about the composition styles, musical instruments characteristics and background of the works presented. The Beethoven "Ghost" trio Op 70 Num 1 is remarkable for its beauty and profound spiritual sense in the second movement.

Tracks from my performance with the Zapopan Symphonic Orchestra, conducted by Guillermo Salvador on July 31, 2013 were incorporated in the "Recordings" Section. These recordings come from the XII anniversary celebration concert of Zapopan Orchestra at the beautiful "Degollado" Theatre of Guadalajara, Jalisco.

Tracks from my performance with the Republican Guard Symphonic Orchestra, conducted by Francois Boulanger on October 2004 at the Invalides Church in Paris, Fr were incorporated in the Recordings Section. These recordings of the Chopin 2nd Piano Concerto were produced by Radio Classique, one of the most important broadcasting radio stations in France, from the Gala Evenning celebrated with four winners of editions of the Paris Piano Competition.

Hi Gerardo: I saw you and Marcela play at Smithville Church. Beautiful music. We talked after show about Veracruz. Are you interested in playing at my house party in Stoney Creek on Dec 14?

Good to see you Luis! Saw your article in the Grimsby Lincoln News in February. Your piano playing is impressive and beautiful!

Hola Luis, It was a treat to hear you play Chopin’s piano concerto as well as the Polonnaise. Bravo!
Please let me know when and where you play in the Niagara region again.
Saludos, Inés

Gerardo , can you tell me the church address where you and your wife play. Will you be playing this up coming weekend?