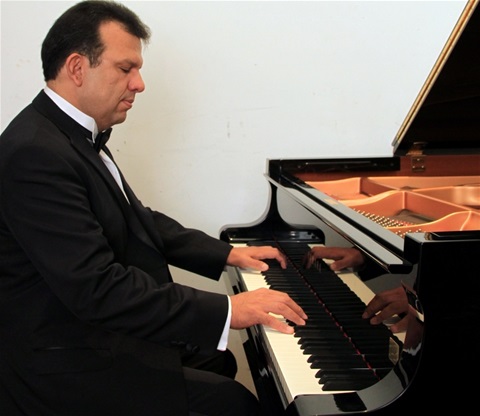 Luis Gerardo Molina completed his Music Bachelor’s Degree with concentration in Performance at the University of the Americas in Puebla, Mexico and Brock University at St Catharines, Canada. He got specialization in pianistic performance from world-class pianists such as Yolanda Castro, Ana Maria Tradatti, Oscar Tarrago, Bernard Flavigny, Dr. Jorge Federico Osorio, Faritza Tchivirova, and Dr. Karin Dibella among others. In 2020 he got the master’s degree in Music Literature and Performance at Western University studying with the recognized Canadian pianist Leslie Kinton, member of the Internationally celebrated Canadian piano duo Anagnoson & Kinton.

Luis is a piano teacher for all levels and ages and an experienced vocal accompanist. He got wide experience accompanying choirs and opera full rehearsals of great works such as “La Traviata” by Guiseppe Verdi, “Tosca” by Giacomo Puccini, “Cosi Fan Tutte” by W. A. Mozart, “Carmen” by George Bizet, and others in Mexico.

Hi Gerardo: I saw you and Marcela play at Smithville Church. Beautiful music. We talked after show about Veracruz. Are you interested in playing at my house party in Stoney Creek on Dec 14?

Good to see you Luis! Saw your article in the Grimsby Lincoln News in February. Your piano playing is impressive and beautiful!

Hola Luis, It was a treat to hear you play Chopin’s piano concerto as well as the Polonnaise. Bravo!
Please let me know when and where you play in the Niagara region again.
Saludos, Inés

Gerardo , can you tell me the church address where you and your wife play. Will you be playing this up coming weekend?